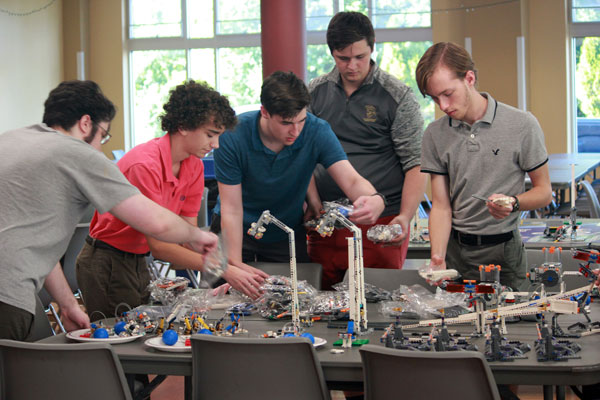 LEGOs covered the cafeteria tables Wednesday evening as students and fellow volunteers spent hours building competition fields for grade school students who will participate in upcoming FIRST LEGO League tournaments. Similar to the larger scale events that our robotics teams compete in each year, these tournaments expose students in grades K-8 to the world of STEM, teamwork, creativity, and problem solving--all with a table-top playing field and pre-assembled LEGO kits. That’s where Wednesday’s volunteers come in.

Countless LEGO pieces arrived in boxes, each box containing all the elements for one competition field. The De Smet Jesuit robotics team, friends, and volunteers grabbed paper plates and plastic bags with pre-sorted pieces, scanned QR codes for the corresponding step-by-step instruction manuals that they opened on their laptops, then went to work building individual components. Completed structures gathered at a table, then were later packed as a kit for one playing field. A finished playing field sat on display nearby.

De Smet Jesuit hosted the build night as a way to support the robotics community, empowering our students to serve younger students and help the programs that later feed into the high school teams. “It’s a win win,” said Mrs. Zuehlke, Competition Planning Committee Member - FIRST LEGO League of Eastern Missouri, and one of the coordinators of the build night.

Mr. Strawhun, moderator of the De Smet Jesuit Robotics Team (DURT), said the build night is one of several opportunities where our students will serve the community through robotics and LEGOs, including hosting the Boy Scout Radical Robots event for students ages 7-13 on October 27 and hosting a Meet tournament for FIRST Tech Challenge (a program Spartans compete in) here on campus on December 7.

For more information on how students can get involved with robotics, LEGOs, and other STEM initiatives, email Mr. Strawhun.

Find the best high school for your son—shadow visits are now open for boys in grade 7 and 8.

We asked our students and teachers: what made them feel like they belonged at De Smet Jesuit High School? Here's one answer to #WhyDeSmet.